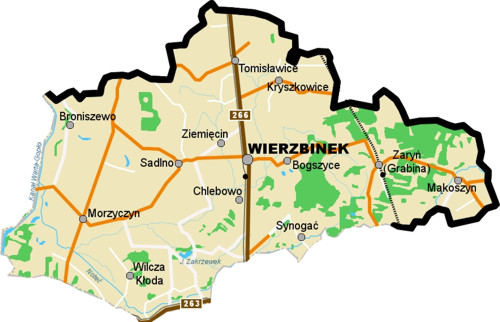 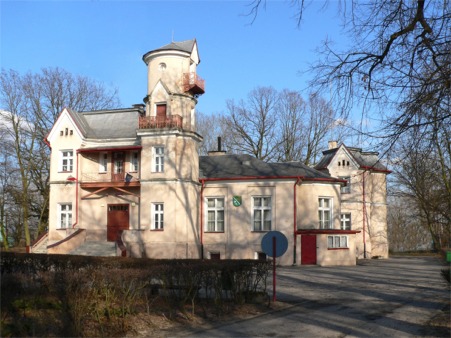 The commune is situated in the north-eastern part of the Konin county. Its area is 148 square kilometers, which is inhabited by 7,5 thousand people. It is thus a commune with rather low population density. It consists of 25 villages. Commune borders on Kujawsko-Pomorskie Voivodeship as well as on other Wielkopolska region communes: Skulsk, Ślesin, Sompolno and Babiak. Warta – Gopło canal, Noteć river and Notecki canal along with meadows make its natural limits. Wierzbinek commune is located on the tourist route Licheń - Ciechocinek - Inowrocław.

The commune is located in the areas, where the archaeologists discovered the traces of human settlement from the bronze era. The legend says that in Noć village Piast Kołodziej was born. Noć is a former royal property, which had its municipal rights in 16th and 17th centuries. Its name, formerly Noteć comes from the outlet of one of the arms of Noteć river to Warta-Gopło canal (formerly Goplenica). For centuries, Wierzbinek, and the other localities in the commune were typical villages. During the January Uprising on the territory of commune there operated insurgent squads, which fought their battles near Nowa Wieś (Kujawy), Ignacewo (Sompolno commune) and Brdów (Koło County). Sadlno is a former ancestral home of Pomians’ family, closely connected with eastern Wielkopolska administrating.

The following need to be mentioned among the most important historical monuments: neo-Gothic church in Sadlno, erected in the years 1855-1856, neo-Gothic churches in Mąkoszyn and Broniszew built in the early 20th century and the palaces - in Wierzbinek dating from the first half of the 19th century, and in Racięcin dating from the turn of 19th and 20th centuries, both surrounded by parks.

The areas located along the Warta-Gopło canal belong to the Gopło Millennium Park.

In recent years, the attempts have been made to restore the willow farming ("willow" in Polish is "wierzba" - thus the name Wierzbinek) and develop the production of wicker goods in the commune. The annual "SALIX" Willow and Wicker Fair (already of pan-regional range) is to stimulate the growth of this industry.

The commune economy is agriculture based. The agricultural land is 10,5 thousand hectares, of which 82,5% is arable, 16% meadows and pastures, a 1,3% - orchards. A lot of rye and potatoes are grown, but also wheat, sugar beets, vegetables and herbs. Pigs and cattle are raised. The commune has about 1,3 thousand individual farms. It makes living by agriculture and craftsmanship. Cultivation of herbs, especially marjoram, thyme, mint; and vegetables - tomatoes, cauliflowers, onions, broccolis and potatoes makes up a local tradition.