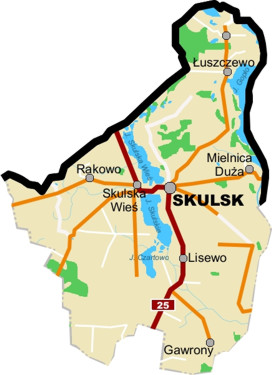 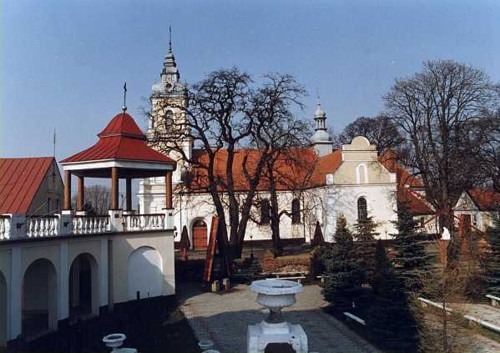 The commune is located in the northern part of the Konin county, on the territory of Wielkopolska Lakeland between the lakes Skulskie (120 ha) and Skulska Wieś (116 ha), which came from postglacial period. Its area is 85 square kilometers; commune consists of 21 villages The population is 6,2 thousand people.

The village of Skulsk (Skólsko) was first mentioned in a document dated from 1249, when it was given to the Norbertine Nun Order in Strzelno. The monastery sold the village to Kujawy Bishop – Gerward ca. 1315. In 1409 - at that time a Royal demesne - Skulsk was given the municipal rights. Thence, on the coat of arms of the city one can see eagle as an element of Polish state emblem. From this moment Skulsk became a part of Radziejs’ non-municipal county. In the middle 17th century, the town was completely destroyed by Swedish troops. In 1870, as a result of economical breakdown before the January Uprising, Skulsk was deprived of municipal rights. In the first half of the 19th century Skulsk became a relatively widely known center of religious paintings manufacture. The village underwent a significant development between 1918 and 1939, with such public investments as the school, dike, paved streets.

The major historical monuments in the village include a brick Birth of the Holy Virgin church from the early 19th century and the 19th century park and palace in Lisewo. The real treasure of the commune is the nature, including 500 hectares of woods and 4 lakes, of which the largest are Skulskie Lake and Skulska Wieś Lake, situated near the village.

In Warzymowo village, located upon Warta – Gopło canal there situated a widespread settlement. Old parish church makes up valuable monument of Gothic architecture. The place was a property of Mikołaj from Warzymów, who was an outstanding polish diplomat in the first half of 15th century. He was a husband of daughter of Mikołaj from Venice, also named Bloody Diablo. He inherited a castle in Wenecja Pałucka and sold it to Archbishop Gnieźnieński, who changed the living part of castle for the prison for priesthood. Connections of Skulsk commune (located upon Gopło lake) with Piastowki Route is reflected not only in the monuments but in legends also. Folk tradition connects Goplana village with place of birth of Rzepicha, wife of Piast Kołodziej, who came from neighboring village Noć.

A part of the commune's area adjacent to Gopło Lake belongs to the Gopło Millennium Park. Also on Gopło Lake, a well-know Children and Youth Rehabilitation Center named after dr Piotr Janaszek is located in the village of Mielnica.

The economy of the commune is dominated by the agriculture. The agricultural area is 5,9 thousand hectares, including 5,4 thousand hectares of arable land and 0,6 thousand of meadows and pastures. Due to rather good soils, the crops include rye and potatoes as well as wheat and sugar beets. Growing of strawberries and vegetables is also significant. All species of farm animals are raised there. There are 170 non-agricultural businesses employing about 350 people.