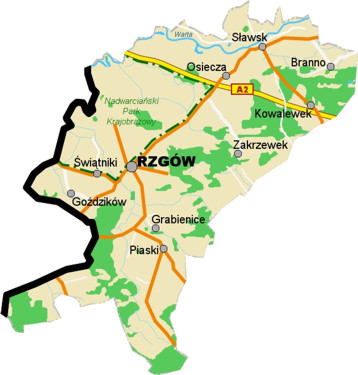 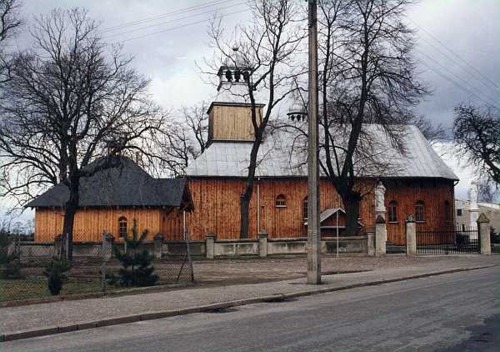 The commune is situated in the south-western part of the Konin County. Its area of 105 square kilometers is inhabited by 7,15 thousand people. There are 21 villages. The A-2 motorway runs through the commune territory.

First reliable historical records of Rzgów date back from 18th century. Then, village was a property of Cistercians’ monastery in Ląd. Later it became a manor house.

Sławsk, former seat of Zarembas’ family, has close connections with personality of Marcin, Kalish Voivode (dead in the middle of 15th century). According to Jan Długosz, he was a leader of one of the Polish regiment at Grunwald fields in July 1410. He is associated with the foundation of fortified court preserved in the form of architectonic relics in palace basements.

The interesting commune’s historical monuments are: St. Jakub’s wooden church in Rzgów founded in 16th century, St. Wawrzyniec’s stone church in Sławsk and church in Grabienice, which construction dates back from the turn of 16th and 17th centuries, as well as manor complex in Sławsk including court from 19th century, granary and park.

n Kowalewek village one can visit Zofia Urbanowska’s Memory House, famous writer, creator of youth literature; she was distinguished with the Laurel of Polish Academy of Literature.

The northern part of the commune is located in the Warta valley, and in its large part lies within the Warta Landscape Preserve. Due to rare animal and plant species living there, the area is an interesting tourist destination. The number of plant species in the park amounts to 1 070 of which 57 are legally protected. There are almost 153 bird species, including snipe, sandpipers, wild geese, garganeys, and mute swans. The park is also a habitat for otters and beavers.

The commune economy is agriculture dominated. The agricultural land is 5,2 thousand hectares, of which 63,5% is arable and 23,5% meadows and pastures. The main crop is cereals. Pigs and cattle are mainly raised there. About 1,1 thousand of individual farms operate in the commune.

Apart from it, there are also about 200 non-agricultural businesses, giving employment to some 350 people.

The commune is distinguished by its special care for the environment.