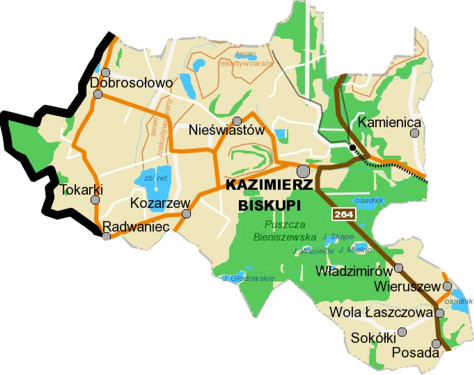 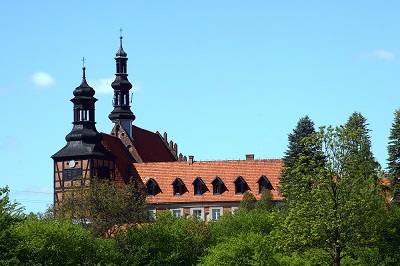 An industrial and agricultural commune situated in the central part of the county. Consists of 18 villages. The commune area is 108 square kilometers and populated by 11,3 thousand people.

Kazimierz Biskupi was probably established by the king Kazimierz Odnowiciel in the middle of 11th century. Since the year 1237 till 1504 the village was a property of Lubuskie bishops, residing at the temples in Lubusz and Fürstenwalde (Germany) and Gorzyca (near Słubice upon Odra). Kazimierz obtained the municipal rights in the late 13th century. During Swedish wars in 1655-60 and 1707 the intruders ruined the town. Kazimierz Biskupi lost the municipal rights during the partition period, in 1870. During the II World War, on the territory of commune, an extermination of Polish and Jewish people took place. In Kazimierskie Forests (Wygoda – Las Krężel place) there perished about 8000 Jews.

The contemporary, post-war development the commune and the town of Kazimierz Biskupi is owed to the Konin Lignite Mine. In 1962, there started building of the first strip mine KWB "Kazimierz"; it involved northern part of the town along with country manor, park and living buildings up to the Rynek level.

The eventful history of Kazimierz - the oldest sanctuary-town in Wielkopolska - is reflected in the existing monuments. The most known historical places are: originally Romanesque St. Marcin’s church from the end of 12th century, with the preserved elements of Romanesque and Gothic style; post-Bernadine late baroque church of Five Martyr Brothers and St. Jan Chrzciciel, actually monastery of Holy Family’s Priests Missionaries, which construction was carried in 1513-20. At the end of 18th century, it was reconstructed after Swedish war destructions; a 17th century wooden St. Izaak's church located in the cemetery; an 18th century Kameduli monastery in Bieniszew; interesting is also the boulder commemorating Johann Reinhold Patkul - the leader of anti-Swedish resistance in Inflanty, who was executed in Kazimierz in 1707 in the presence of the King of Sweden, Charles XII.

The county also boasts of the gorgeous natural monuments - the preserves of Mielno, Sokółki, Bieniszew and Pustelnik, all situated in the Kazimierski Forest. These forests along with Głodowskie lake and forest reservoirs - Skąpe and Wściekłe lakes being a part of Powidz-Bieniszew protected scenery area - make a natural basis for tourism and rest organizing.

In the mine reclaimed areas many sports and recreation objects have been built, including the Konin Aeroclub airstrip, stadium, shooting range and the sports arena. Very active is the Commune Cultural Centre in Kazimierz Biskupi.

The economy of the commune is industrial and agricultural. The industrial character is determined by mined lignite deposits and industrial plants supporting lignite mining. Altogether, in the commune there are more than 320 non-agricultural businesses, employing over 1 550 people.

There observed a dynamic development of private sector. Thanks to this, Kazimierz Biskupi commune takes second place (after Stare Miasto commune) among other 14 communes of the county according to the number of economy subjects. The most development tendency there observed among the establishing of trading, construction, production and transporting subjects. There dominate trade and services.