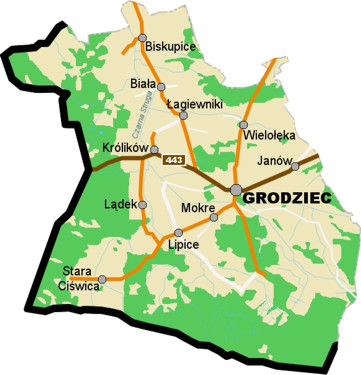 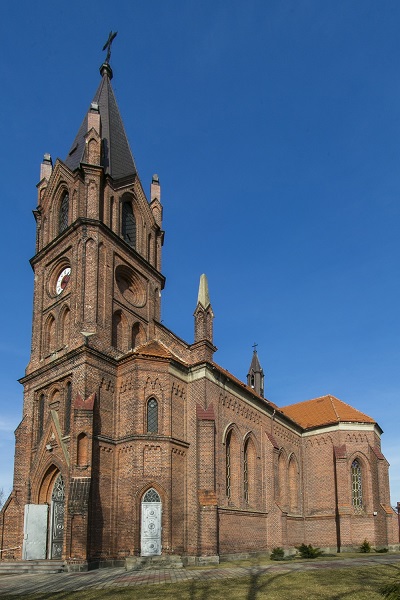 Grodziec is situated on the Turek-Jarocin main road. It is an old settlement, first mentioned in 1394. The village was a nobleman's property. Both, lore and history refer to the courageous defense of the village by Castellan Godziecki during the Swedish invasion in the 17th century. The symbols relating to this event are now shown in the coats of arm of the commune.

At the end of 15th century Grodzieckis’ family, by means of Anna’s (daughter of Mikołaj, Santocki castellan) marriage with Ambrozy Pampowski – Konin Starost, got into the sphere of great politics. Relics of medieval fortified court from family’s former residence make a faint trace of those historical events. At the turn of 15th and 16th centuries Grodzieckis’ (Dryja coat of arms) belonged to the circle of highest nobility of former Konin County. Adam Grodziecki, superb poet, who kept close contacts with the reformers of Swiss church, was the most outstanding representative of this family.

The historical monuments in Grodziec and the commune prove eventful history of the region. Among the most important is the palace from the second half of the 18th century with the annexe built in the early 19th century. Both buildings are situated in the historical park from 17th century including also a hornbeam valley, which is natural monument. Grodziec also has a neo-gothic Roman-Catholic church and a neo-gothic protestant church, both built in the end of the 19th century. In Biskupie place, there preserved a historical park-palace complex.

In Królikowo, which has its municipal rights since the beginning of 16th century and was for the first time mentioned at the beginning of 14th century, there located a set of parish sacral buildings. Church, which documents date back to the Romanism period, was re-gothicized in 15th century. After some destruction, it was reconstructed in the second half of 18th century and got new baroque style. There preserved two Romanesque gravestones with the Life Tree image, which date back to the oldest period of church history. In the village also is the water mill from the 19th century. Additionally, in many places in the commune are the archaeological excavations confirming the human settlement beginning as early as the Neolithic times. Królikowo was an ancestral home of Zarębas, outstanding family, known since the middle of 13th century. It gave rise to the successors of Sławsk and Rychwał.

The most treasure of the commune is clean nature and forests taking up as much as 11,3% of the area. This creates favorable conditions for the development of tourist industry. Two impounding water reservoirs are planned here.

Forming of Forestry Education Center and marking out of some educational paths, which cross Królikowo forests complexes was a valuable initiative of Grodziec forestry management.

The economy of the commune is predominantly agricultural. The agricultural land is 6.0 thousand hectares, of which 22,8% is pastures. The dominating crops are rye and potatoes, though wheat, barley and oats are also grown. The main livestock is cattle and pigs. The commune has 759 individual farms.

There are more than 143 non-agricultural businesses, employing almost 300 people, including about 90 in the service sector.