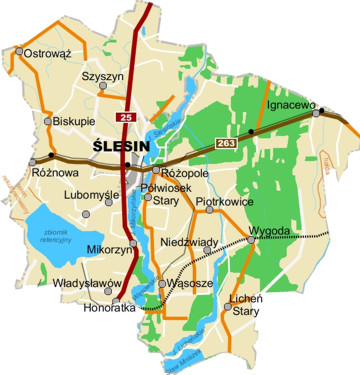 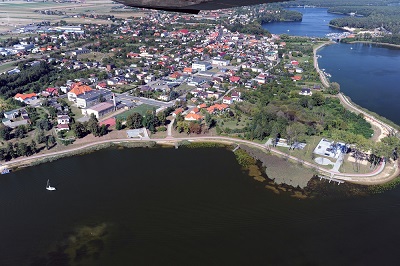 A large urban-rural commune located in the central part of the Konin County. The commune area is 146 square kilometers and it consists of 26 villages. The population is 14 thousand people, including 3,15 thousand people living in Ślesin. The town is located on the main road No 25 leading from Ostrów Wielkopolski to Bydgoszcz.

The Ślesin history dates back to 1231, when duke Konrad Mazowiecki presented the village of Szleszyno to Poznań bishops. In 1358 king Kazimierz Wielki gave the village the municipal rights. In 1870 the Tsarist Government revoked the municipal rights as the repression for the January Uprising. The rights were reinstated in 1921.

Since 15th century Ślesin is placed on the significant trade track; its importance was raised while the capital moved from Kraków to Warsaw. One of the customs chambers of former Konin County (Kleczew, Tuliszków, Rudzica near Konin) was also situated here.

In Licheń Stary village, former town (1458), situated about 9 km from Ślesin located is a well-known in Poland and abroad Holy Virgin Sanctuary, a popular destination of pilgrimages. The importance of the Sanctuary is increased by the five-nave basilica consecrated in June 2004 with whole area of 10 000 m2. The height of the main nave is 40 meters. The basilica can house 7 000 seating and 10 000 standing people.

A particular treasure of the commune is excellent conditions for the rest and recreation. There is a line of large lakes in the commune - including Ślesińskie, Wąsowsko-Mikorzyńskie, Licheńskie lakes and large forest areas (20% of the commune area). This part of the commune belongs to the Gopło-Kujawy landscape preserve. The lakes are connected with the Warta-Gopło canal and offer a long, beautifully located tourist route. Numerous resorts are located on the lakes (total of several thousand beds) and Commune Sports and Recreation Centre.

The Ślesin Commune organized 2002 Motor-boat European Championships, and it was the first host of the county-wide event 1st Grand County Feat - Ślesin 2000. In 2002 the Ślesin Town and Commune Local Government hosted the County Harvest-Home Festival.

The commune economy is dominated by agriculture. The total area of agricultural land is 8,6 thousand hectares, and this is mainly arable land. The pastures is 15,1%, and orchards 1,8% of the total agricultural land. The main crops are rye and potatoes, but also wheat, sugar beets and fodder. The livestock is mostly pigs and cattle. The commune has about 1,3 thousand of individual farms.

The lignite is mined in the southern part of the county. The production of construction materials has developed based on the clays and silts extracted with the overburden in the lignite pits.

In total, in the commune there are about 600 non-agricultural businesses employing 1,7 thousand people, including 600 people in the industry.