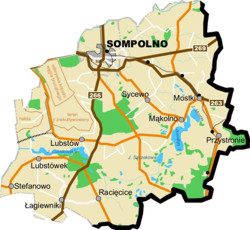 An urban-rural commune located in the north-eastern part of the county. Consists of 22 villages. The area of the commune is 137 square kilometers, inhabited by 10,5 thousand people, including 3,7 thousand residents of Sompolno town.

The first mention about the village of Sompolno in the historical documents is from 1242. In 1477 the archbishop Jakub of Sienno established a town, which he named Dębno after his coat of arms. This name, however, did not stick, and since the 1526 the town has been called Sompolno. During the January Uprising, the Sompolno environs witnessed many battles and skirmishes with Russian troops. In 1870 Sompolno shared the fate of many other places and lost the municipal rights, which were not regained before 1973. In the beginning of the 20th century Sompolno was an important junction of the narrow-gauge railway, which significantly influenced the economic development of the town and commune.

The commune has many tourist attractions, such as the hiking routes, driving routes and resorts and camping areas on Lubstów, Mąkolno, Mostki and Szczekawa lakes. Here you can find many nature curiosities, including a unique forest preserve Kawęczyńskie Brzęki, which features the brekini sorb.

The Sompolno Town and Commune Local Government hosted the County Harvest-Home Festival in 2005.

Lignite is mined in the western part of the commune. In total, 1,7 thousand people are employed outside agriculture, in 435 businesses.