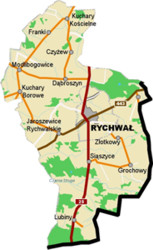 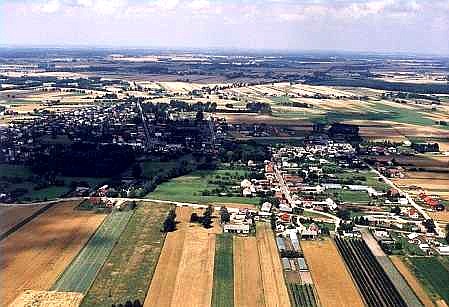 An-urban-rural commune located in the southern part of the county within Rychwalska Plain area. Consists of 23 villages. The commune area is 11,7 square kilometers and it is inhabited by 8,4 thousand people, including 2,3 thousand people in Rychwał. The commune is located along the main road No 25 connecting Konin to Kalisz and thus ensuring easy access to the A-2 motorway.

Favorable location has caused that for a long time Rychwał has been a local administration and economic centre. At the turn of 14th and 15th centuries, on the territory of Rychwał commune, there was constructed fortified castle (so-called tenement house at mound) with porches and enclosed with deep moat. One can see some fragments of the castle up today. It was Marcin’s Zaremba from Sławsk property, who purchased Rychwał along with surrounded villages and probably got Rychwał its municipal rights (before 1459). After his son dead, the grandson know as knight highwayman, who attacks the merchants traversing the Kalisz-Poznań track, took over the whole property. In 1525, at the request of Albrecht von Hohenzollern - last great Teutonic master, who came to pay homage to polish Ruler - Zygmunt Stary King pardoned him. After pardon he did not desist from this shady business. Being captured, he was lost by beheading. Rychwał Castle is one of few and not big medieval residences. Other residences worth seeing are: Halszka’s Donjon in Szamotuły, Vault in Jarocin and recently identified tenement house in Przyjma.

Other interesting monuments include the Holy Trinity parish church built in 1476 and expanded between 1790 and 1800, which houses, among others, a 15th century crucifix, 17th century stoup and the Renaissance tombstone of the founder – Gabriel Złotowski.

In Dąbroszyn village there preserved falling into disrepair former noble manor. Kuchary Kościelne village also has its jewel; it is wooden temple, where one can see gravestones of Gałczyńskis’ family closely related to Kossaks’ - famous family of artists, painters and writers.

The commune has large areas of mixed forests being a good place for rest and recreation. In the vicinity of town there is an area with a unique place of mud flora named "Bagno", and in Rybie village there are places of Scotch pine at the age of 200 (nature monument).

The Rychwał Town and Commune Local Government hosted the County Harvest-Home Festival in 2001 and the 6th Grand County Feat in 2005.

The commune economy is dominated by the agriculture. The agricultural land is 8,6 thousand hectares, of which almost 80,1% is arable, the remaining part is pasture. The crops are mainly cereals and potatoes. The livestock is mostly pigs and cattle. In the Rychwał commune, there are about 1 300 individual farms.

There are also about 330 non-agricultural businesses, employing 420 people, including 40 in industry.