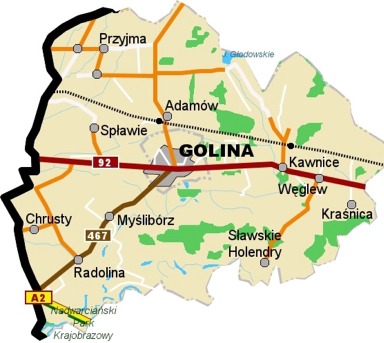 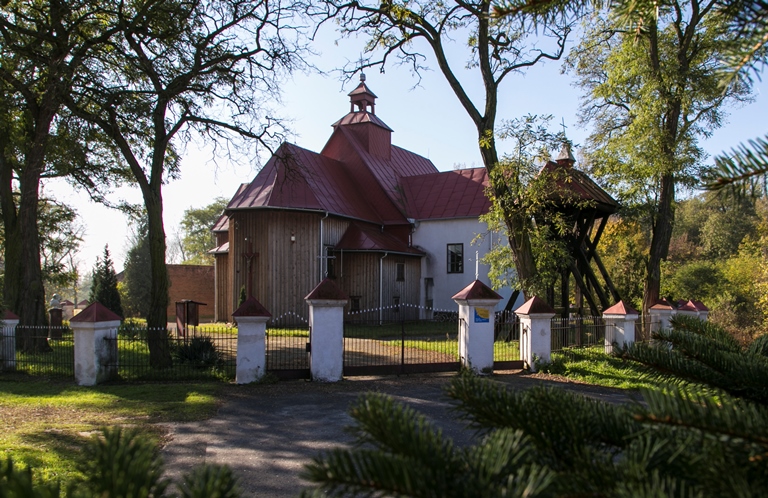 Urban-rural commune, located in the central-western part of the Konin County, at the edges of Kujawy lakes complex. The total area of 99 square kilometers is inhabited by 11,8 thousand people, including 4,5 thousand residents of Golina town. The county consists of 18 villages and 3 settlements. Important Warsaw-Poznań roads and railway routs run through commune's territory, including the exit from the A-2 motorway.

Golina has been known from the 14th century. It has got the municipal rights in 1362 under privilege for Stanisław Kiwała from Ostrów given by Kazimierz Wielki. It used to be a privatively-owned town, a seat of Golińskis’ family and Żychlińskis’ family. Before the partitions it was within the Kalisz Voivodeship. In 1793 became a part of Prussia. Between 1807 and 1815 it was joined to the Grand Duchy of Warsaw, and after 1815 it was in the Congress Polish Kingdom. Golina lost the municipal rights in 1870 to regain them in 1921.

Radolina village, located within the commune limits, is a place where Piotr Wysz was born. He was a Krakow Bishop and first chancellor of Kraków University renovated in 1400. Next professor and chancellor of Kraków University, who created university’s status (also called Mikołaj from Pyzdry) was born in Sługocin. Bazyli Goliniusz, also called Fabrycius, was also signed into the history of university as professor and chancellor.

In Przyjma place, there preserved the rests of former residence of Przyjemskis’ family (Rawicz coat of arms), which was founded at the turn of 15th and 16th centuries and ruined during the Polish-Swedish war period in the years 1655-60. Przyjemskis’ family, which belonged to Polish political elite of the end of 16th century and beginning of 18th century, has marked its presence in Wielkopolska history with numerous established foundations. Owing to this foundations aid there were built numerous stone monasteries in Kobylin, Koźmin, and Rawicz. Foundations were the founders of many places as Rawicz, owners of over 100 villages and a few dozen of towns. They reached the highest honors in Polish state, therein honors of Marshal of Polish Kingdom. They were well known in diplomacy and bravely spelled their blood at the battlefields.

The tourist attraction of the commune is the areas located on the Warta river forming the Warta Landscape Preserve, the habitat of many birds and plants not found in other areas and also of rare water and swamp vegetation. Another tourist destination may also be the Bieniszewski Forest, bordering Głodowskie Lake (54 hectares).

The town has footwear, food-processing and metal industries. There are also some construction companies. In total, there are 623 non-agricultural businesses employing almost 1000 people.

The Golina Town and Commune Local Government hosted the 2nd Grand County Feat in 2001 and the County Harvest-Home Festival in 2004.2