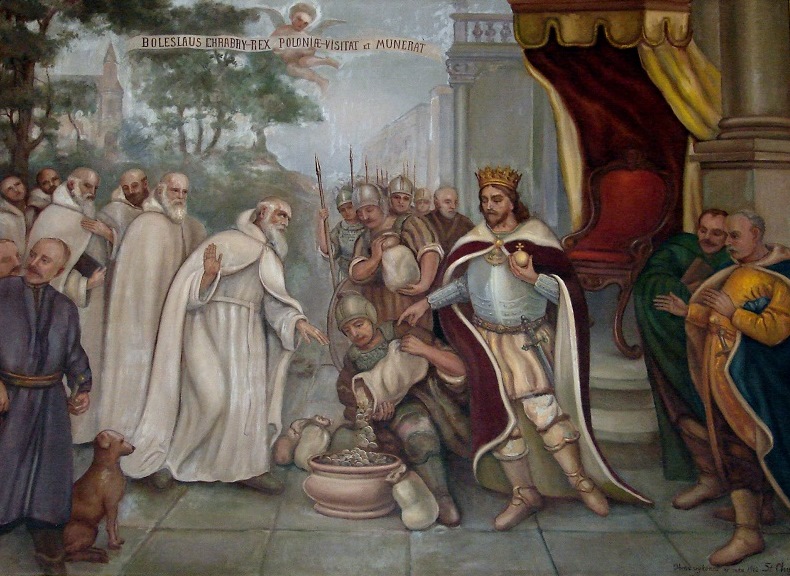 The cult of Five Martyr Brothers has developed mostly in Kazimierz Biskupi and from there it has radiated outside. The traces of the cult may be found in many places in Poland and Europe.

The brothers came to Poland ruled by prince Bolesław Chrobry in 1001 or 1002. John and Benedict were Benedictines from the circles close to St. Romuald of Pereum. Three Slavs joined them: Matthew, Isaac and their servant Cristin. Most likely they were accompanied by Barnabas, whom unfortunately existing sources do not mention much and who, according to the legend, survived the night of 10th November 1003.

The relics of the murdered hermits, who could not fulfil their mission among the Slavs, were taken to Ascoli (Italy) and after 1008 to Gniezno. In 1038, Czech duke Brzetyslav took the relics to Prague as the spoils of war.

Their remains, precisely St. Cristin’s relics, landed in Stara Bolesław, Benedict’s abbey in Sazawa and cathedral in Ołomuniec (Czech Republic - Morawy). Most probably, in the beginning of 12th century, some remains came back to Poland. Some fragments were transferred to Zwiefalten (Germany). Already at the end of 12th century cult was known in Cistercian abbey in Ląd upon Warta, located near Kazimierz Biskupi. Only in early 16th century, did Poznań bishop Jan Lubrański receive the pope’s consent to move the relics from Czech Republic to Kazmierz Biskupi. He felt ill and subsequently died on his way, so the relics did not arrive in Kazimierz only before 1525. They were placed in the St. John the Baptist and Five Martyr Brothers Bernardine church. 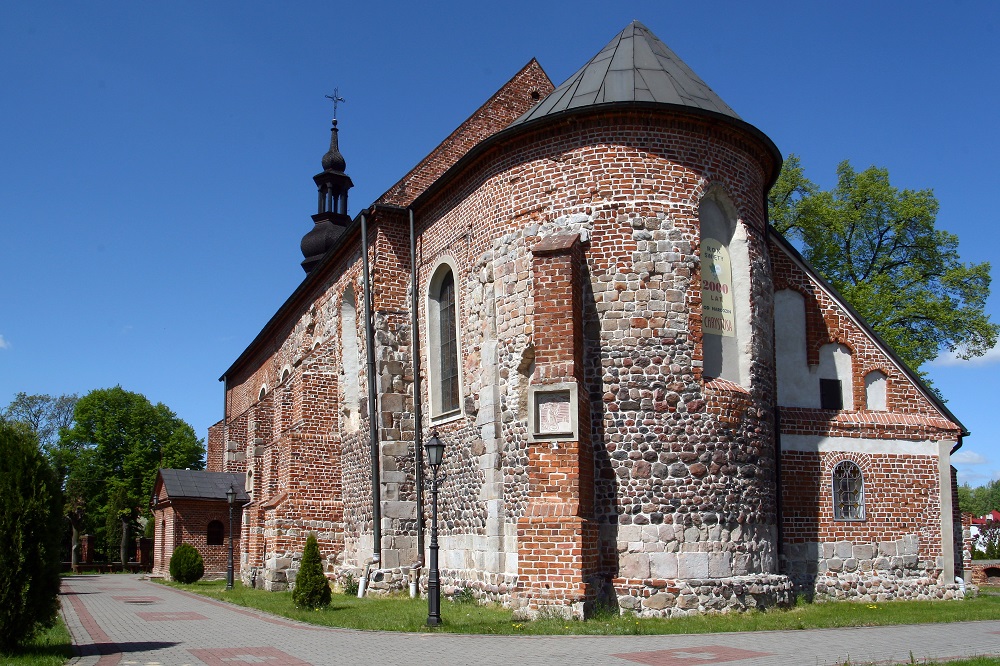 We start our trek in the wake of Five Martyr Brothers in the oldest place of Kazimierz Biskupi – the St. Martin church. It was built in the turn of 12th and 13th centuries. The lore tells that the church was built in the location of St. Matthew’s hermitage, which was also his grave.

The peculiar feature of the church is external stone ashlars and the stonework signs on them. Their origin is not known. The tradition links them with Five Martyr Brothers, seeing in one of them the coat of arms of Benedictines from the circle of St. Romuald. The sign near the entrance to the temple is most likely related to the consecration of the church.

St. Martinchurch was rebuilt thrice, for the first time in early 16th century by Jan and Mikołaj Lubrański, the erstwhile owners of Kazimierz Biskupi. Next reconstruction, which destroyed many Romanesque and Gothic parts of the building, took place in the 18th century following the fire. During restoration works between 1970 and 1971, the remains of Romanesque portal were uncovered in the southern wall. The subsequent reconstructions may be tracked on external walls. The locals used to believe that the field stones in the walls had come from the chapel built by the Saint martyrs themselves – after each reconstruction they would put them in the wall again with great care. 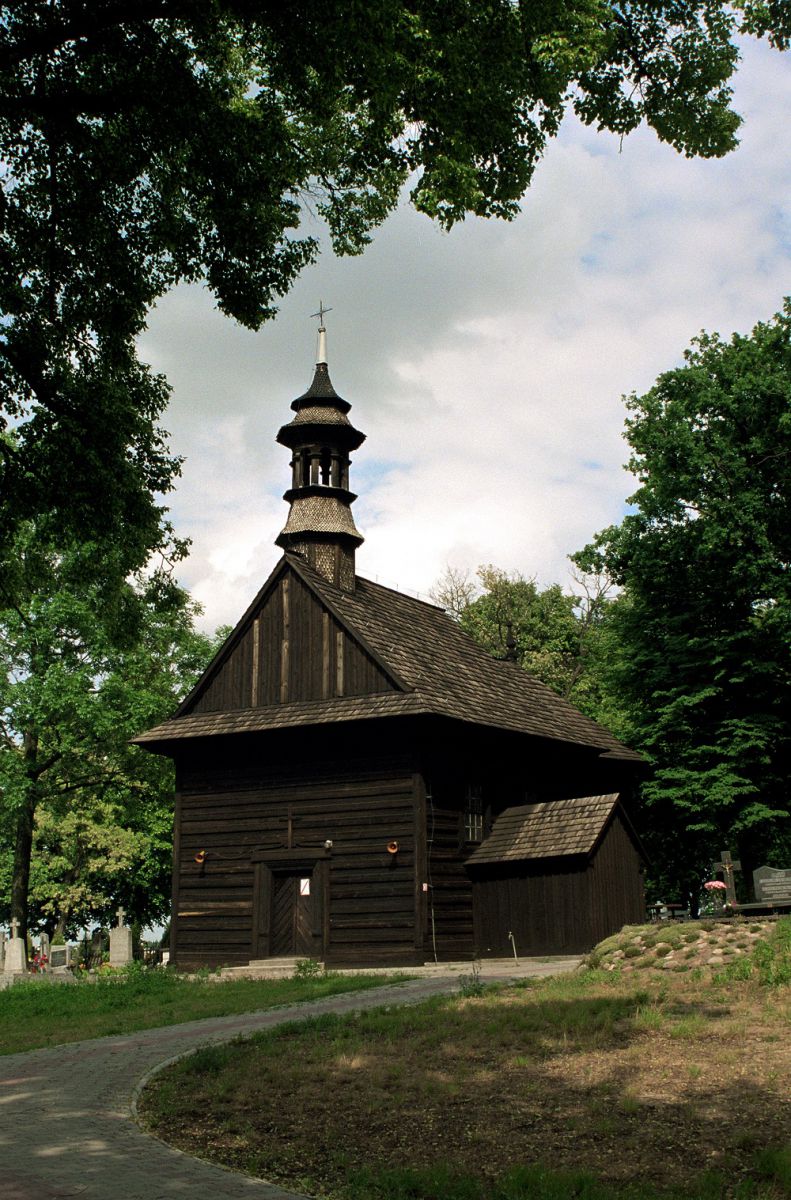 From St. Martin church, the route leads to wooden St. Isaac church located in the parish cemetery. It was officially mentioned even in the middle 15th century. Its present shape dates back to 1783. Since the end of 19th century it has been used as the cemetery chapel.

Inside, on the altar, there is a painting depicting St. Isaac. The original altar has perished.

In the Łosośka street, which we take to return to the centre of Kazimierz, there is a place where a chapel used to be. The street was actually named after it. The chapel was demolished by the Nazi occupants during World War II. The chapel has spawned a legend about the salmon which is reborn in the well day after day (łosoś is salmon in Polish). The fish was the Brothers’ daily food.

Next stage of our trek is late-Bernardine monastery in Klasztorna street, presently the seat of the Holy Family Missionaries. According to the lore, the monastery was built in the place of St. John hermitage and chapel. It was in the place where the Brothers used to gather for common prayers. The founder of the monastery, which construction began in 1513, was Poznan bishop Jan Lubrański, who earlier, with his brother Mikołaj Gardzina, Poznań Voivode, had bought the Kazimierz estate from the Lubuski bishop, Teodoryk.

Our trek cannot miss the Kameduli monastery in Bieniszew. We can reach it by the black hiking route, which starts next to Klasztorna street. The route leads through the Bieniszew forest (nature monuments, preserves, educational paths). We can also reach Bieniszew by car. Drive in the direction of Konin. Past some 1.5 km, turn right in the signposted forest road.
The links between the Kameduli monastery and Five Martyr Brothers are clear. Following the reform of the Benedictine order St. Romuald, from whose circles our heroes had come from, had introduced new hermit rules. These rules and the white frocks prevail to this day. The name of the order (ordo camaldulenses) comes from the first hermitage in Campo di Maldoli in Italy (eremo di Camaldoli).

The vicinity used to have many more places linked with the cult of Five Martyr Brothers. Even in 1791, existed the St. Cristin chapel, erected most likely in the early 14th century near Kazimierz Biskupi, in so-called new town of Krystynowo. Near Kurzyniec lake, on the former road from Kazimierz to Kleczew, was the St. Benedict chapel. The chapel was demolished in the beginning of the 18th century. The Bieniszew forest used to be a location of the St. Barnabas chapel-oratory. It was the origin of the Kameduli monastery, by which it was incorporated in the late 17th century.

Described and worth visiting places are the history and tradition that for thousand years have inseparably linked Konin Region with Poland and Europe.
Cult of Five Brothers in Kazimierz Biskupi and its surroundings shed its influence to Europe and whole Poland. There were attempts to root it in Budzisław, Chwałków Kościelny, Obra, Pobiedziski (Wielkopolska), Miszewo Murowane, Rokitno, Lewiczyn (Mazowsze), in Podlasie, Kujawy, Lubuski region and many other places.