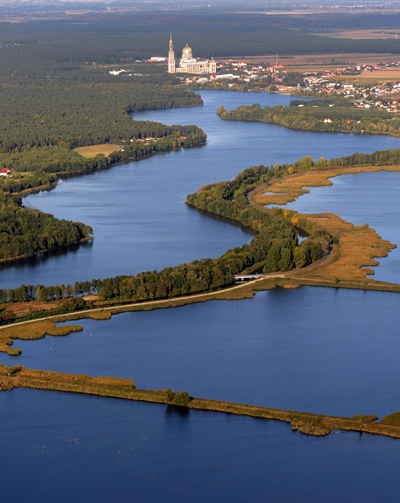 Many inhabitants of Poland associate the area of Konin with big fuel and energetic industry. This is enough to add within just in a split-second that it is an ecologically degraded region. Nothing more deceptive. This type of subconscious belief vanishes when we get to learn about its history, monuments and nature. As far as culture is concerned, this is one of the most interesting Polish sub-regions, known as Eastern Greater Poland. The slight forestation of the area is compensated by great cleanliness of water reservoirs and diversified land relief. Passing through the vicinity of Licheń we may fall under the illusion that we are in Masuria. Our journey leads along routes winding around lakes, crossing numerous watercourses. We are being lifted on crests of dykes, and we can see many species of water birds gliding above our heads, as they have enough food in wealthy lakes.

Kazimierz Forest, fragment of the old Pyzdry-Konin Primeval Forest with still functioning – one of two Polish Camaldoli hermitages in Bieniszew, reveals its unique charm. Not far away, over the banks of Gosławskie Lake, there is a Gothic castle of Andrzej Łaskarz, eminent diplomat active during the reign of Władysław II Jagiełło, overlooking the area, and in close vicinity we can see an octagonal St. Andrew the Apostle church with rich heraldic decoration. It is believed that it imitates St. Maurice church in Constance (Switzerland) and constitutes a magnificent example of European architectural class. Therefore it is not surprising that replicas of this particular church have been erected in Miszewo Murowane in Masovia and in Oksza (near Jędrzejów in Lesser Poland). We shall see relations concerning cultural heritage not only within maintained monuments. This is perfectly reflected in the past of this particular sub-region. Kazimierz Biskupi stands as the centre of the all lands owned by bishops of Lublin, residing, among others, in Fürstenwalde, Lubusz and Gorzyca. They are the people incorporating Konin District in the history of the Czech Republic (Prague, Stara Boleslav, Sazwa) and Germany. Historic Konin District (until 1793) remained under a strong influence of Cistercian abbey in Ląd by Warta, which was closely related with German abbey of Altenbergen and Cologne, metropolis on the Rhine River.

Without learning more about Roman and Gothic art of this area it will be hard for us to understand all we can see on the most well-known route in Greater Poland – the Piast Route. In Pobiedziska, Waliszewo, Gniezno (cathedral), Trzemeszno and Strzelno we shall easily find traces of relations between these temples and monasteries and the area of Konin. Let us mention the beautiful epitaphs in the convent of Norbertines in Strzelno – local provosts and priests: Sierakowski, Jaskólski – these are all people from Konin District. It shall be difficult for us to appreciate the contribution of Greater Poland inhabitants in the national culture, and especially their participation in establishing Krakow University, as well as its many other symbols. Without knowing more about the history of Konin land we will spiritually lack the knowledge on the origins related with Polish statehood, relations with Teutonic Order in Prussia, and our presence in Europe. Learning about history, about this magnificent cultural heritage, will certainly make it easier for us to follow Polish trails in Italy, Germany, France, Sweden, Great Britain, the Czech Republic, Austria and many other states. Here we shall gain the confidence that we are Europeans. Within this land we can see traces of historic fights with the Teutonic Order; nonetheless, we can also observe traces confirming the presence of people from Konin in Pomerelia (f. ex. Cistercian abbey in Oliwa, Malbork, Skarszewy, Sobowidz). They are also visible in Polish capitals (Krakow, Warsaw). Here we have an emphatic track of specific comprehension of European cultural space by our ancestors: we should not seek for Europe outside the borders of our own Mother land, as we should create it in our own house… This was and still is an integral part of Europe, Poland and Greater Poland – which cements its main aortas: Warta River together with its tributaries, such as Noteć and Prosna, reflects the individual, and at the same time unique cultural heritage. These interesting castles, churches, monasteries, palaces, and grads are worth seeing to be reassured about the European cultural heritage.