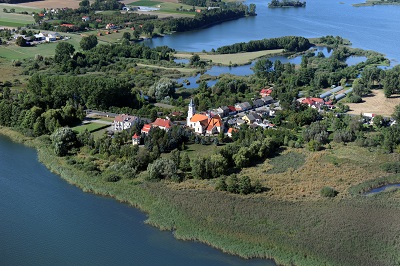 Konin County embraces territory situated in the middle part of Poland, at the eastern borders of Wielkopolska Voivodeship. It takes up the area of 1.578,7 km2. This makes the county to be the fourth in the Voivodship and belongs to group of the largest counties in Poland.

Territory of county belongs to the strip of lowlands within the limits of Wielkopolska Lowland. In the central part of county there stretches the wide Warta valley. To the north and to the south from it there rise the diverse uplands, additionally varied with 23 glacial lakes in the north:

There predominate temperate climate with the mild winters and low yearly level of atmospheric precipitation.

Territory of the county is poor in useful natural resources. The most profitable resource is a brown coal, which deposits are located to the north from Konin City.

Forests occupy about 25 thousand ha, it means 16,37% of the whole area. On the territory of county there are 63 natural monuments. Among the natural-scenery landscape there are protected areas: Warta river Valley, forest complex to the south-east from Konin City, Bieniszew Primeval Forest as well as Gopło Lake and Skulskie Lakes surroundings.

They are divided into 295 village councils. The local community inhabits 488 rural and 5 urban places.

Konin County population amounts (according to data from 31.12.2017) 129.715 residents. Ślesin commune has the most number of inhabitants (13.992), while the smallest in this regard is Grodziec county (5.220). The biggest town according to its residents number is Golina (4.493). Population of the rural territories makes 86,27% of the whole county population.

Local labor market in regard of demand (number of job places) forms its two sectors: agriculture and fuel-energy complex along with their economic entities.

Shares of particular branches in the economic structures of communes are riding on the similar level with that county-wide. There is noticeable domination of trade and repair service sector. In other sectors, there appear greater differences, but deviations from the average rate are of some percents at maximum (for example: in Ślesin commune it concerns hotel and catering industry, transport and warehousing, and in Golina and Sompolno communes - building industry).

Konin county, like other units of Konin sub-region (territory is almost the same of former Konin Voivodeship), despite of negative impact of fuel-energy complex, is marked by relatively large area of so-called high-value natural territories and areas including elements of ecological structures.

Such features of Konin county as: geographic location, clear natural environment, route of lakes along with forests complexes, historic objects and protected areas make this region to be attractive for the development of tourist service.

Exceptional virtues of Konin county make the basis for establishing of such forms of tourism as:

Central location of Konin county offers favorable conditions in regard of the communication availability. This is a very important feature for tourist sector. Easy access is conductive to forming of the tourism structures within this territory and brings a lot of advantages. Beside the routes and means of transport, the communication base of Konin county also includes marked out hike, bicycle, kayak trails.

On the territory of Konin county, all the recreation objects and hotels concentrate their attention on the development of sport-recreation equipment base. In lower degree, there expanded the base of paratourist services and those entertainment concerned.